MOGADISHU- Somalia is in a political crisis. For the first time in the country’s recent history, the four-year mandate of Parliament and the executive has expired without the selection – or election – of a new administration, or an alternative political agreement among stakeholders.

The crisis stemmed from the deep-rooted trust deficit between the centrifugal and centripetal forces in Somalia that has been exacerbated in recent years by incumbent President Mohamed Abdullahi Mohamed Farmaajo’s self-centred approach to governance, and his administration’s failure to effectively manage the complex political dispensation of the country. 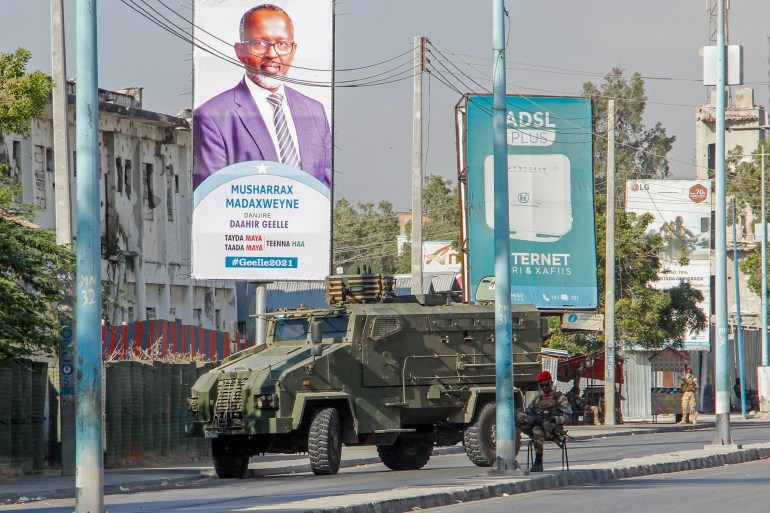 Besides the Federal Government of Somalia (FGS) and many opposition groups, there are several other political forces that are influential over Somalia’s political scene.

Somaliland, one of the two entities that formed the Somali Republic in 1960, is one such force. Somaliland unilaterally declared its independence from Somalia in 1991. Since then, it successfully built its own governmental institutions and held periodic elections, but failed to gain international recognition. Despite its de-facto independence, under the tribal-based formula, there are 57 seats in Somalia’s two-chamber Parliament (17 percent) that are designated to some of the clans from the region. The candidate who has the backing of these representatives stands a good chance of being elected the president of Somalia.

Beyond the breakaway region of Somaliland, Somalia is made out of five federal member states (FMSs) – Galmudug, Hirshabelle, Jubbaland, Puntland and the South West. Despite officially being part of the Federal Republic of Somalia and subject to the authority of the FGS, every single one of these states has its own constitution and political agenda. Just like Somaliland, these states have significant influence over how federal elections are held, and how the country is governed. Most importantly, they all envision Somalia’s future differently and at times behave as independent states.

Today, besides civil society and women’s groups, the numerous domestic political forces in Somalia can be divided into two broad categories: Supporters of the central government (including the South West, Hirshabelle and Galmudug), and the supporters of the opposition coalition (including Puntland and Jubbaland ).

Populism, intolerance and failure to compromise

The conflicting demands and desires of FMSs, coupled with the political volatility of the wider region, means political consensus in Somalia is always fragile and pragmatic leadership is often needed to maintain stability in the country.

Rather than working to increase collaboration and trust between different political actors in the country, however, President Farmaajo has been pursuing populist policies aimed at further centralising power since his inauguration in early 2017.

With the help of his former Prime Minister Hassan Ali Kheyre, Farmaajo removed many of his rivals from power both at regional and national levels in the last four years. Farmaajo and Kheyre removed Mohamed Sheikh Osman Jawari, the speaker of the House of the People, and Ibrahim Idle Suleyman, the chief justice of the Supreme Court, from their posts. They also forced out the presidents of the South West, Hirshabeelle, and Galmudug, and replaced them with their allies.

Moreover, rather than working towards strengthening Somalia’s political consensus and implementing practical policies to protect the state from future political turmoil, Kheyre and Farmaajo focussed their efforts on widening their support base through publicity stunts. They spent lots of energy and resources on image building, photo-ops, slogans, symbolism and social media campaigns, but failed to take any actual steps towards bringing the highly polarised nation together.

They also sidelined Somalia’s decision-making institutions and tried to consolidate all political power at the hands of a few individuals loyal to the administration. Under their rule, the centralisation of power reached such levels that the Council of Ministers, Parliament and all other governmental bodies have been reduced to rubber stamps.

The Farmaajo administration has also weaponised its juridical sovereignty and used state institutions against its opponents. For instance, the government used security forces against politicians, denied flights to Kismayo, and cancelled special arrangements that the international community employed in dealing with Somaliland.

Farmaajo and Kheyre have not been open to criticism from the international community either. In January 2019, for example, they expelled the UN secretary general’s special representative in Somalia, Nicholas Haysom, after he raised questions about the alleged extrajudicial killings of anti-government protesters in the South West.

Eventually, even Kheyre could not stand in the way of Farmaajo’s desire to govern the country on his own. When the two longtime allies clashed over how/when the next elections should be held, and Kheyre’s own presidential ambitions became clear, members of parliament loyal to Farmaajo held a no-confidence vote at the Lower House of Parliament.

Even though universal suffrage is still a distant dream for Somalia, since the formation of the Third Republic in 2000, the country has held several indirect elections and had five different presidents and governments.

While indirect elections made the peaceful transfer of power possible on several occasions in Somalia’s recent history, the lack of a functional, just and widely accepted electoral system is still a major obstacle in the country’s arduous path towards democratic governance.

During their time in power, Farmaajo and Kheyre have repeatedly failed to come up with an electoral road map that would be acceptable to a majority of power factions in the country.

Initially, they pushed for a closed-list proportional representation model with one national district. Then, they attempted to introduce a system where the leader of the party or the coalition that wins the parliamentary election automatically becomes the country’s president. Most FMSs, the parliament, and the opposition perceived both proposals as gerrymandering efforts and swiftly rejected them.

As the end of his presidential term drew nearer, Farmaajo announced his intention to stay in power until an election is held. This further angered the administration’s rivals who have long been convinced the president is intentionally hindering the national negotiations on the electoral framework in an effort to illegally extend his time in power.

Farmaajo and his government’s populist politicking and self-centred approach to governance slowed Somalia’s democratic progress and deepened its political divides. While many in Somalia support the efforts to bring regional powers that repeatedly challenge the authority of the central government under control, they do not support Farmaajo’s apparent desire to further centralise power, silence all political opposition, and bring one-man-rule to the country.

The president and his team focussed so much on their own battles and political futures that they failed to fulfil their core tasks – ensuring national security, increasing political inclusion, developing the constitution, engaging in judiciary reform and, most crucially, establishing a functioning electoral system.

As a result, Somalia is once again in political turmoil and facing an uncertain future.

The way out of the impasse

It is, however, not too late to reverse course. If all stakeholders return to the negotiating table, acknowledge that no one can win all the time in Somali politics, and start working towards finding a compromise, the country can return from the brink of collapse.

After so much conflict and polarisation, the parties will most likely not be able to negotiate in good faith without mediation from a neutral third party from the international community. But once a mediator is named and all stakeholders come together under one roof to discuss their concerns, demands and grievances, there could be two possible ways out of the current impasse.

First, the parties can focus on making the agreement Farmaajo reached with the leaders of Somalia’s five FMSs on September 17, 2020 work.

Under the deal, the central government and the regional administrations would appoint electoral commissions at the federal and regional level. Largely clan-based electoral colleges of 101 delegates from each state would elect Lower House members of Parliament, with clan elders, the public and regional officials picking the delegates, while local parliaments in the federal states would select the 54 senators. Meanwhile, the election of the 57 legislators representing some of the clans from Somaliland was decided to take place in Mogadishu.

The deal, which fell apart due to disagreements between Farmaajo and his regional rivals over how to conduct the process, can still be implemented after a revision that addresses the concerns of the FMSs, the group that Speaker of the Upper House Abdi Hashi leads, women’s rights groups that want to ascertain a 30 percent quota for female legislators in Parliament, and the opposition.

The international community is pushing for this solution, believing the deal has the core ingredients of a final settlement that can pave the way for an election, and the formation of a new administration, in the next few months. The short-coming of this quick-fix approach is that the country can find itself in a similar impasse in the same situation in 2025.

The more durable solution, however, would be to introduce a one-term limit on the presidency and find a way for the parliamentary elections and presidential elections to be held at separate times. Somalia has had success with such a system in the 1960s – people elected parliamentarians in 1959/1960, 1964 and 1969 while the members of Parliament elected the executive in 1961 and 1967.

It is not realistic to expect from a president who is seeking a second term to organise competitive and credible elections in the country. To maintain peace and keep alive Somalia’s fragile democracy, the leaders of the FGS, the opposition and the FMSs must be ready and willing to compromise. Only through dialogue and the establishment of carefully thought out power-sharing mechanisms can they keep the people of Somalia safe and the country’s democratic development on course. Only a pragmatic approach can lift Somalia out of its current crisis.

The way out of Somalia’s political impasse ( Al Jazeera)

We use cookies on our website to give you the most relevant experience by remembering your preferences and repeat visits. By clicking “Accept”, you consent to the use of ALL the cookies.
Cookie settingsACCEPT
Manage consent

This website uses cookies to improve your experience while you navigate through the website. Out of these, the cookies that are categorized as necessary are stored on your browser as they are essential for the working of basic functionalities of the website. We also use third-party cookies that help us analyze and understand how you use this website. These cookies will be stored in your browser only with your consent. You also have the option to opt-out of these cookies. But opting out of some of these cookies may affect your browsing experience.
Necessary Always Enabled

Any cookies that may not be particularly necessary for the website to function and is used specifically to collect user personal data via analytics, ads, other embedded contents are termed as non-necessary cookies. It is mandatory to procure user consent prior to running these cookies on your website.